I ended up at Crow Peak Brewing Co. on a late Sunday afternoon - after a hiking adventure that had taken me up to Crow Peak for the first time. Truth be told, knowing that I was headed to this Brewery as my reward for lugging a 40 lb. bag of camera equipment/backpack full of hiking gear (because you never know!) is about the only thing that kept me going.

I walked in exhausted but probably the happiest I had been all day. Craft beer has a tendency to do that to a (this) person. It was a perfect day to be here - football games playing on television, lightly raining outside, and friends all gathered together to have a good time.

Especially these guys. They were having so much fun that I wanted to pull up a chair. 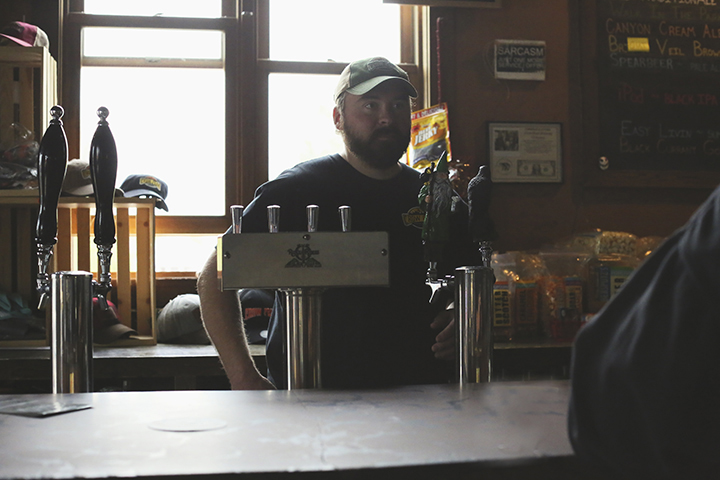 Craft beer styles vary and there are certainly enough opinions to go around when I asked, "What is everyone drinking these days?"

Without batting an eye, I was told of the Big Three:

And then, after hearing the list, the friendly patrons started to chime in.

That's when I was told the Easy Livin' Summer Ale was a hands-down favorite (pictured below). I asked him if he was worried it would be taken out of rotation now that it is fall (a legit concern, right?) and he looked at me with panic. I don't think it had occurred to him. Maybe it won't? What do I know??

Here is a link to the Taproom Beer Menu if you are wanting to save it or share it or forward it to a friend a hint for happy hour (or after viewing the fall colors this weekend..!!)

No matter the beer rotation, you will usually find something you like AND on most weekends, you'll also find live music! You'll find the link to upcoming events here.

After hanging out with the football crowd, I ventured outside to see what everyone else was up to.

When I walked outside I remembered how cold it was but I spied that gorgeous fire pit burning, and well ... it  was just the invitation I needed.

Usually you will find most everyone sitting outside - but upstairs on the viewing deck - because the atmosphere is so nice and relaxing. But on this less than sunny afternoon, all I saw were vests, layers of flannel, and everyone as close to the fire as they could get. Fall has arrived.

Kids were running around playing, friends were laughing, and you knew you had come to the right spot to unwind. What a great way to end a day on the trails.

(I took a walk around the area to see if the Farmer's Market was open or if I could find some food at the local BBQ stop right across the parking lot, but both were closed. So I found these canisters instead. Crow Peak Brewing manages to make even these cool.)

While there is no denying the cozy, cool, and laid-back atmosphere that Crow Peak has going on, if you find yourself in other parts of the Black Hills, we provided a map of the Wine + Brew Trails.

And if you are looking for a hike or some scenery to go along with your weekend plans, we provided that, too: Black Hills Trail Guide.